I've been making roughly the same apple pie recipe since I was in elementary school. It was always a special time of year when the good pie apples would start to arrive at the grocery store. There are a lot of choices out there but my favorite has to be Jonathan apples.

They're not your standard Granny Smith that you can buy all year long. They're somewhat of an elusive ingredient. I haven't even seen them in a grocery store for years. I'm lucky enough to be able to buy them at my local Farmer's Market this year. Keep your eye out for them and I promise you won't be disappointed!

Apple pie should always focus on the star, the apple, of course. But it's important to have a solid foundation as well. I have a pie crust recipe that I use for everything from antelope hand pies to chicken pot pie to this apple pie recipe. It's very versatile and always turns out perfectly for me. For sweet pies, I start with a good quality butter like Kerrygold Irish Butter

When I started making pies years ago, Crisco was still a common ingredient in our house. It made the absolute best pie crust but it's full of things that I don't feel great about eating. Learning to make pie crust with butter presented some challenges and it has taken me years to perfect the method. I've found that using a food processor to blend the butter into the dry ingredients is the best way, for me, to produce a tender crust. I know there are purists out there that believe doing it by hand or with a pastry blender is the only way to go. But if you've had trouble with making pie crust the traditional way, I suggest you give the food processor method a go. It doesn't hurt to start with a good quality butter either. I hear rendered bear fat is the new best thing for baking but I don't have any (yet) so I like to use Kerrygold Irish Butter

The biggest mistake I see people making with pie crust is that they're more worried about how it's going to look rather than how it will taste. I vote taste over appearance any day. I try not to overwork the dough and the appearance ends up being a little more rustic, and I'm ok with that. The tender, flaky, melt in your mouth crust more than makes up for the presentation.

This recipe tends to make a bit more dough than you need. Don't worry. You can roll out the excess dough, cut it into small rectangles, sprinkle with cinnamon sugar and bake at 400 for 10-15 minutes. You get the best of both worlds - no food waste and a bonus dessert!

When I think of apple pie, I think of the rich aroma from the baking spices that fills my house for days. I've gradually increased the amount of spices in this recipe over the years. Maybe my tastes have changed but I really enjoy the intense flavor of freshly ground nutmeg. Once you buy whole nutmeg, you'll never go back to the stuff that's been sitting on the grocery store shelf for who knows how long. You can even buy a special grater

Before I started making my own pies, I remember helping my mom make them. My favorite part was peeling and slicing the apples. It doesn't sound like much fun, but when you have this gadget

it turns a mundane task into an activity that any kid would enjoy. I remember watching in awe as this machine turned an apple into perfectly peeled slices and left behind long strings of apple peel. Dangling the apple peels above my mouth like a big spaghetti noodle and watching with anticipation as more and more strings were made is one of my favorite kitchen memories. I love watching my little guy do the same thing now.

This pie makes too many apple peels to eat fresh, so I like to toss them in some cinnamon and dehydrate them into apple strings. Again, this is a win-win - you get a healthy snack and no food waste.

Apple pie is good on its own but the caramel walnut topping adds an extra layer of sticky sweet goodness that brings this pie to near perfection. It's a very simple step that makes it seem like you really went the extra mile. If you need a perfect fall dessert recipe to impress your guests, this is it. Make sure you get it started in the morning though because it takes a loooong time to cool. I'm pretty guilty of not being able to resist cutting into it too early even though I know it's not set up yet. Don't be like me. Wait for it to cool completely, and you won't be disappointed. Oh and don't forget to save the little crispy bit of caramel that inevitably spills off the pie and bakes into sweet, crispy goodness. It'll help tide you over while you wait for the pie to cool. 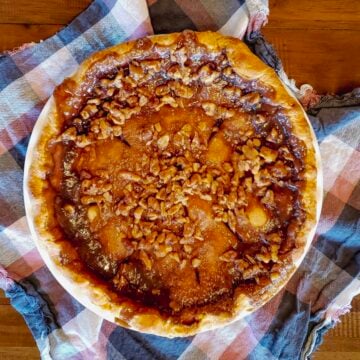