Peak to Plate » All Wild Game

I know I get a little fancy around here sometimes so I thought I should throw in a simpler recipe every now and then. Sometimes simpler really is better. You might find this as a surprise but I don't always have time (or the desire) to cook all day. Plus, I love a good sandwich. This Philly cheesesteak only takes a few simple ingredients and comes together pretty quickly once the meat is sliced.

What Cut of Meat do I use?

Thinly sliced ribeye steak is the traditional meat for Philly cheesesteaks. The venison equivalent of the ribeye is the backstrap or loin. I found it a little too painful to cut up a perfectly good backstrap so I used a sirloin roast instead. Ribeyes are prized for their marbling but venison doesn't have much, if any, fat. This is where my favorite cooking fat comes in handy - lard. It enhances the meat a bit by adding some fatty richness.

How do I cut meat for a Philly cheesesteak?

In order to get paper thin slices of meat, you need 2 things: a sharp knife and a mostly frozen piece of meat. I find it much easier to slice meat thinly when it's still frozen. It's super important to slice the meat as thin as you can for this recipe. Otherwise, it could be a little tough to bite through. Once the meat is sliced thinly, I like to thaw it the rest of the way on paper towels (in the fridge, of course). This helps remove any off flavors in the meat and will also help brown the meat better.

What is Worcestershire Sauce?

The seasoning for the steak is pretty simple - salt, pepper, and worcestershire sauce. Worcestershire sauce is one of my favorite ways to season wild game. It's a great addition to burgers, meatloaf, broths, cheesesteaks, etc. Worcestershire sauce is made up of all sorts of funky and fermented flavors - onions, garlic, vinegar, and anchovies are some of the main flavors. They all come together for a flavor packed sauce that's sure to take your cheesesteak to the next level. Oh and if you're wondering, Google says to pronounce worcestershire "wu·stuh·shr." Thanks Google, but I'm not really sure if that helps me.

What vegetables are on a Philly cheesesteak?

Philly cheesesteaks can have a variety of vegetables in them like bell peppers, onions, mushrooms, hot peppers, etc. I've been told on multiple occasions that green bell peppers have no place in our kitchen so I opted for a red and yellow bell pepper. I don't think green peppers are bad but I do prefer the flavor of the other colors. Plus I love the colors. I sauté the vegetables in a little bit of lard and season them with salt, pepper, and worcestershire sauce. Pretty simple!

Putting it all together:

No Philly Cheesesteak would be complete without, you guessed it, cheese. Apparently the type of cheese you use on a Philly Cheesesteak is a big point of controversy. You're either on the provolone side or the Cheez Whiz side. I opted for the more "natural" state of cheese and used provolone for this recipe. With a lean meat like venison, it can be difficult to not overcook the meat and still have that perfectly gooey melted cheese. I like to add the cheese right after I mix in the worcestershire sauce so that the meat can finish cooking and the cheese can melt at the same time. Layer the vegetables and cheesy meat on a toasted hoagie roll and top with spicy brown mustard. The mustard is optional but adds a little kick to the sandwich that I really enjoy. Serve with some tater tots and your favorite beer and dig in! 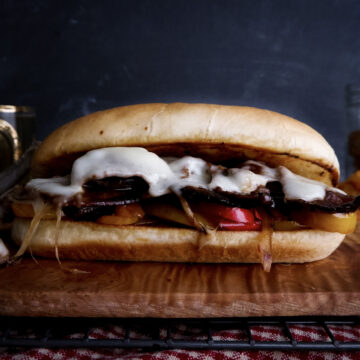