Whiskey. Beer. Deer. That's all you really need to whip up a delicious St. Paddy's Day feast. Ok, so you need a couple more ingredients but those are the basics. Corned meat with cabbage is really an Americanized celebratory meal but we still enjoy it every year anyways. We like to kick it up a notch by braising the corned venison in beer and glazing it with a delicious whiskey mustard glaze. If you're looking for a fun meal to celebrate St. Patrick's Day, you've come to the right place!

What is corned venison?

Corned venison is venison that has been cured in a solution of curing salt, salt, sugar, and spices. The name "corned" comes from the original use of large grain rock salt that is about the size of corn kernels. The long brining time cures the meat and also tenderizes it. As the meat sits in the brine, it absorbs the salty liquid and the muscle cells expand to hold more moisture. The additional moisture in the meat makes it very flavorful and tender. Traditionally, corned beef is made with brisket. Corned venison is often made with roasts from the hind quarter instead of brisket.

Is there a brisket on a deer?

All hooved animals have a brisket because it is the muscle that lines the lower chest. But, the size and anatomy of a deer are much different than that of a cow so the brisket may not be what you expect. The brisket on a deer is very lean and thin while the brisket from a cow is fairly thick and has a layer of fat on it. While it may be different than beef (like every cut of venison is), you can definitely still enjoy it!

How to cure venison:

Making corned meat is actually a pretty simple process. It only takes a few simple ingredients (curing salt, pickling spices, garlic, salt, sugar, and water) and not a lot of technique. The key ingredient is time. From start to finish, it takes about 5-7 days depending on the size of your roast. You'll also need a large container to store it in while it's curing.

How to cook corned venison:

What sets this corned venison recipe apart from others is the braising process and the glaze. Corned meat of any kind definitely needs some low and slow cooking after the curing process to break down the connective tissue and tenderize the meat a bit more. You have to boil it anyways, so you might as well boil it in something that will add an extra layer of flavor. Is it worth it to "waste" 2 beers to boil some meat in? Yes, yes it is. Trust me on this one.

Once the meat has been cooked in all that beer, you might as well add some whiskey, right? The mustard glaze is really the icing on the cake here. Three simple ingredients (whiskey, mustard, and honey) make the perfect sweet, tangy glaze for your corned venison. Since venison doesn't have a layer of fat like a corned beef brisket, it needs a little help in the moisture department. I like to cover the roast in some lard to seal in the moisture before placing it in the oven to caramelize the glaze. I also try to keep the oven time to a minimum to protect from moisture loss.

What to make with corned venison:

Corned venison (or corned beef) is often the centerpiece for a St. Patrick's Day feast. Alongside the meat, cabbage, potatoes, and carrots are often served. I like to put them all together in an Instant Pot (or pressure cooker) along with the braising liquid from the corned venison. It's super simple to make and the vegetables turn out very flavorful and tender. As an added bonus, you can "set it and forget it" while you focus on glazing the venison. It's a win-win!

Can you make corned venison without nitrates?

Corned venison can absolutely be made without nitrates (from the curing salt). While it will still taste delicious, the meat will be more of a brownish-gray color instead of that beautiful pink color that is usually associated with cured meat. You can use the same recipe but omit the curing salt if you'd like.

How to freeze corned venison:

If you're going to go through the work of brining some venison, you might as well get the most bang for your buck. You can brine a few roasts in the same amount of curing liquid and have many delicious meals in your future. Once the meat has cured for 5 days, rinse it off and vacuum seal it. Then, freeze it for up to 6 months. Once you're ready to enjoy it, thaw the meat and follow the recipe below.

Putting it all together:

Alright you have your corned venison and sides (theoretically), now all that's left to do is eat and enjoy! You can top the vegetables with a little fresh parsley to brighten it up. If you want to spice it up a bit, horseradish is a great pairing with the meat as well. Serve it with your favorite beer and enjoy! 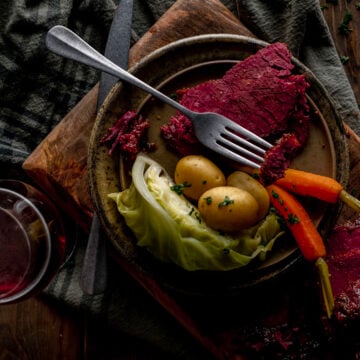